It has been over ten years since the real estate bubble burst, causing the US housing market to collapse – an event seen as the start of the economic turmoil that later entered the collective memory as the “global financial crisis”. It was caused by an explosive mix of rising real estate prices, over-eager lenders, and the practice of packaging loans in complex investment products. Consequences included the bankruptcy of Lehman Brothers investment bank in September 2008, which dragged credit institutions and their customers all over the world down with it and required government bail-outs worth billions. Real estate markets all over the world were on their knees, and even some German open-ended real estate funds weren’t spared. They had to come to grips with the most serious crisis in their more than 50-year history.

The shock was a profound one, and its effects are still being felt. Both players and observers continue to wonder why no one – or at any rate no one whose voice was heard – recognised the toxic mix that had put the global financial system at such serious risk. “At the time there was widespread euphoria among investors; no one wanted to see the risks,” recalls Manfred Binsfeld, Senior Analyst at the Berlin firm Scope Investor Services. Things have fundamentally changed: “Uncertainty has been a constant companion of investors since the financial crisis.”

Recognising potential risks early on and developing appropriate means for countering them has therefore become a core task of real estate firms over the past ten years. This is undoubtedly the result of stricter requirements imposed by regulators in Europe and the US. But it has also been in the industry’s own best interest to include more professional risk management strategies and systems in the investment process – a view shared by 90 percent of professionals questioned last year by the Royal Institution of Chartered Surveyors (RICS) in the first survey of its kind.

RICS, a renowned professional body that accredits real estate professionals worldwide – investors, asset managers and experts – created the RICS Real Estate Investment Risk Forum (IRF) in 2015. The Forum, a network of more than 40 senior investors from many of the world's largest real estate investment businesses, is committed to enhancing and continuously improving the industry's approach to risk management. “Two years after IRF was created, I am even more convinced that the initiative is – and will continue to be – of vital importance for the entire sector,” says Martin J. Brühl, who assembled and chairs IRF.

In spite of major progress on risk management, Brühl, whose day job is Chief Investment Officer and Member of the Management Board at Union Investment Real Estate GmbH, still harbours one very specific concern. “Given the enormous amount of capital seeking investment opportunities on the real estate market, there is a risk that some lessons will be forgotten ten years after the onset of the global financial crisis.”

was the global prime yield in 26 top markets in Asia, Europe and North America in mid-2017 – an historic low.

And in fact, investors’ appetite for risk has increased again over the past few years. They are increasingly willing to take the plunge into higher-yielding niche products such as micro-apartments, student flats, multi-storey car parks, logistics spaces and product developments – or markets that were previously unfamiliar to them. “Concerns about the low level of core investment returns is leading investors to move up the risk curve,” says Philip Barrett, Chief Risk and Investment Officer at PGIM Real Estate, the real estate asset manager of the American life insurance company Prudential Financial. “Risk management departments need to be alive to the increased risks that are now being taken,” warns Barrett, a member of IRF. They need to remain alert because it is justifiable to wonder whether the yields that can be obtained – even from the safest of all property investment products, a fully-let office building in a good location in a major international city – still adequately reflect the underlying risk. For example, global prime yields on offices bottomed out in mid-2017. Based on a total of 26 top markets in Asia, Europe and North America, those yields were 4.6 percent, reports Hela Hinrichs, an analyst at the international real estate consulting firm JLL in London. Net initial rents in European cities – particularly Germany – have experienced a particularly sharp decrease.

net initial yields for core office properties in Berlin at the end of 2017.

In mid-2017, investors acquiring a top office building in Frankfurt am Main have had to accept yields about 90 basis points lower than they were 12 months previously. In all seven of the main office locations in Germany, says Helge Scheunemann, Head of Research Germany at JLL, “prime yields at the end of 2017 are barely above 3 percent, and in Berlin they have already fallen below that pain threshold.” Core office buildings there are now offering an initial yield of 2.9 percent. However, based on current fundamental economic and monetary data, a decision to buy is not necessarily wrong, even from the viewpoint of risk management. The world economy is on a satisfactory and a mostly synchronous growth path, observes David F. Milleker, Chief Economist at Union Investment. In 2018, GDP growth is expected to be 2.4 percent in the US, 2 percent in the European Union and at least 1 percent in Japan, according to Union Investment projections. Milleker does not believe this will necessarily increase inflationary pressure, either in the US or Europe. That makes it less likely that the central banks – either the Fed in the US or the European Central Bank – will drastically increase base rates, or raise them faster than expected.

These are very positive signals for property investors – but for risk managers this is far from the complete picture. That’s because they think in terms of much longer time frames, another important difference compared with risk management for securities investments. According to PGIM Risk Officer Barrett, property investment must be concerned “with both the long-term secular drivers of our business, such as demographics and urbanisation, as well as disruptive technologies, such as artificial intelligence and driverless cars.” 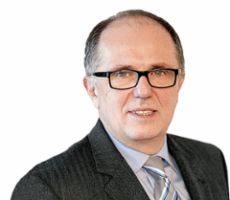 Uncertainty has been a constant companion of investors since the financial crisis.

Hauke Brede, Chief Risk Officer at Allianz Real Estate until late 2017, agrees that risk management means more than simply looking at short- and medium-term issues related exclusively to real estate. Questions related to the fungibility of a property, the prospects of selling it after holding it for a specific period, reviewing the appropriate sales price and technical and structural quality are required subjects for risk managers. He believes other areas to watch are risks to reputation, the consequences of digitisation, the dangers of cyber-crime, new regulatory requirements and political risks over the medium and long term Given the variety of tasks involved, it’s no surprise that most of the respondents to the IRF survey emphasised the interdisciplinary nature of professional risk management.

In practice, risk managers are concerned with other, more specific questions. At almost 70 percent, the vast majority of respondents considered research to be a decisive driver of success for risk management, although they also saw a significant need for improvement in this area. Inconsistent reporting of global property market data – transaction volumes, growth in rents, yields and valuation procedures – was of particular concern. Two thirds of the major investors questioned in the RICS survey are involved in at least 11 national markets, and one third are active in more than 20 countries, so the desire for comparable data between markets is particularly understandable. The aforementioned increase in the number of investment classes also increases the need for consistent data reporting.

In this context, Hauke Brede has great hopes for the positive effects of digitisation, including the use of artificial intelligence. For example, it is entirely possible that self-learning software might be used to analyse leases or drones deployed to evaluate the operating performance of a shopping centre. Drones equipped with cameras could be used to provide data about parked cars – an indication of how attractive a shopping centre is to customers. Using new technologies based on complex computer models (algorithms) could also positively impact the development of real estate risk management. They will simplify risk management and make it more cost-effective, according to the consulting firm PwC. Experts agree that anticipating developments of this kind and integrating them into a corporate strategy will be richly rewarding. Professional risk management is seen as providing a clear competitive edge in the current unending competition for properties that offer sustained high yields. What is still seen as a strategy for minimising investment risk could soon become opportunity management.

That is subject to one proviso, however: the lessons from the global financial and capital market crisis must always be remembered, and knowledge about past downturns and their causes must be passed on to the next generation. This is particularly important because risk management departments tend to be very young, and many employees have begun their careers since the financial crisis. This reminds Philip Barrett that the real estate investment management business has been accused in the past of making long-term investments with short-term memories. It is up to the new generation to prove the contrary.

Do you want to know what Martin J. Brühl says about risk management? Watch the interview at www.union-investment.de/realestate