Buildings in 2050: networked systems ensure optimum use of renewable energy sources, digital technologies support process control, maintenance is automated and property management is based on data analysis. Not a single gram of the climate-harming greenhouse gas CO₂ escapes unnecessarily or without being detected. Welcome to the age of climate-friendly commercial real estate! It may sound like science fiction, but some property investors and portfolio holders are already giving it a try. However, there is still a long way to go before this is standard practice. The first thing is to demonstrate and evaluate the risks associated with buildings and then determine how much will have to be invested in modernisation to conserve energy. The detection of CO₂ emissions by buildings is part of a global trend. The primary target of the Paris Agreement, adopted in December 2015, is to keep the global temperature rise below 2 degrees Celsius and to pursue efforts to limit the increase to 1.5 degrees. For the first time 195 countries have agreed on a legally-binding climate treaty that calls for reducing CO₂ emissions by 2050. For example, the EU member states want to cut their emissions by at least 80 percent from 1990 levels, while Germany’s target is as high as 90 percent.

But the turning point is not in sight. For example, the renowned scientific organisation Global Carbon Project predicted an increase in global CO₂ emissions of about 2 percent in 2017 – for the first time in the past three years. That’s what makes Germany’s targets for decarbonising so ambitious.

In addition to energy and transport, the focus is on the building sector, which is responsible for some 30 percent of total CO₂ emissions in Germany. The aim is to make existing buildings nearly climate-neutral by 2050, with emissions to be reduced by 80 to 95 percent while final energy consumption declines 50 percent. The necessary energy will then come from renewable sources. At the same time, the potential for efficiency will be increased and renewable energy sources will become more attractive than fossil fuels. That’s the theory, anyway.

In practice, the targets are posing a huge challenge to major property managers. Greenhouse gas emissions by buildings must be cut from the current 119 million tonnes to no more than 72 million tonnes by 2030 and then reduced significantly in the following two decades to 209 million tonnes CO₂ to meet the German government’s target of a 90 percent reduction in emissions from 1990 levels by 2050. Based simply on the numbers, every building will be limited to emitting no more than 14 kg CO₂ and consuming no more than 100 kilowatt hours of final energy per square metre per year. However, current levels are 94 kg CO₂ and 196 kilowatt hours, well above that.

Not much time is left to develop the appropriate instruments and solutions. Banks and insurance companies have long been concerned with risks related to climate change. The issue attracted far more attention following a speech by Mark Carney, the Governor of the Bank of England and Chair of the Financial Stability Board, to the Lloyd’s insurance group in September 2015. In it he referred to analyses by the UK Prudential Regulation Authority, which in its “Climate Change Adaptation Report” raises the question of whether climate risks can cause the financial markets to falter, in other words, whether such risks can be systematically destabilising. Carney’s answer is clear: yes. 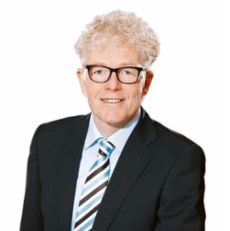 We’re at the beginning of a major upheaval in technical building services.

This is because political action to reduce CO₂, court cases involving people affected by climate change and losses caused by extreme weather events could, in his view, prompt a reassessment of the value of companies and investments. The risk of stranded assets is real, as shown by studies such as the annual Global Climate Risk Index, which concludes that storms and floods caused 267 deaths and losses of $47 billion in the US in 2016. Germany was also affected, with 15 people killed by storms, and financial losses of almost $4 billion. And things could get worse.  Property investors now include climate risks in their investment decisions. According to the Global Real Estate Sustainability Benchmark (GRESB), 90 percent of the 750 global property managers and funds it covers, with real estate assets of $2.8 trillion, take climate risks into consideration. One instrument for this is certified green buildings. But there have already been improvements in the arsenal used by fund, asset and investment managers to ferret out CO₂ offenders In the US, professional building owners use the Web-based software Measurabl.

The German Industry Initiative for Energy Efficiency (Deneff) has worked with representatives of the real estate, finance and energy industries to develop solutions as part of the “Climate Friendly Commercial Properties” study. An open-source toolbox segmented into seven user types and eight different use classes has been developed to provide fund, asset and investment managers with practical tools for targeted investments in climate action.

Evaluating climate risks in a portfolio

One important step is the Excel-based software solution for doing a stranded asset risk analysis, which major property managers use to scan their own building portfolios for climate risks and determine the need to invest in modernisation to conserve energy. Building and energy consumption data is input in the preformatted database, and the analysis shows which buildings in the portfolio will not be in compliance with Germany’s climate action plan by 2050 and how high the costs of any adaptation work will be.

Union Investment is already using the tool to assess the climate risks to which its property portfolio is exposed. During a pilot phase, some 170 buildings were reviewed to determine their climate conformity up to 2050. Ten properties were filtered out, and they are undergoing energy monitoring to identify potential savings. The buildings will be fitted with the necessary meters and data control will be handled in cooperation with the property manager Apleona. Depending on the size of the property and the building services already in place, the costs of initial installation are between €30,000 and €100,000; operating costs each year will be about €10,000. “Given the energy savings of up to 25 percent per building per year and the possibility of effectively reducing CO₂ emissions, those investments will pay for themselves in the future,” says Jan von Mallinckrodt, Head of Sustainability at Union Investment Real Estate GmbH.

In any event, building technology and facility management are experiencing a major upheaval due to digitisation. Web-based technologies are becoming an integral part of building infrastructure, culminating in smart buildings that are networked with weather data, traffic information and other relevant sources and “know” in advance when energy will be needed and where.

Uwe Rotermund, Managing Partner of the engineering firm that bears his name, headquartered in Höxter, described the current transformation process at the Lower Saxony GEFMA symposium in September 2017: “In my view, we’re at the beginning of a major upheaval in technical building services. We are experiencing strong digitisation of entire systems as well as individual components.” He adds, referring to the “internet of things,” that “in future, every pump, every lamp will be able to use IoT solutions to communicate.”

The new Phoenix Contact building in Bad Pyrmont is a showpiece for how buildings may operate in the future. The building electronics company demonstrates the benefits of its modern building automation systems (known as “building IoT”) in 71,000 square meters of production, development and office space. An integrated energy supply ultimately makes a separate heating and cooling system unnecessary. This allows smart networking of all buildings with different power generators and the cogeneration plant. All data is compiled and processed centrally in real time in the IoT-based building management system known as Ecosystem Emalytics. “Existing buildings are also helping make the leap forward into the age of the smart building,” affirms Frank Schröder, Head of Facility Management at Phoenix Contact.

Smart buildings have long been a reality for Martin Rodeck, Executive Managing Director Germany of OVG Real Estate. The Grand Central Berlin building, under construction since July 2017, is OVG’s third digitally networked office building to use smart technologies for climate-compatible, user-friendly operation. The first property of this kind was The Edge in Amsterdam – which has gained an international reputation – and it is to be followed by The Pier in Hamburg’s Hafencity. And CA Immo is constructing a “concrete genius,” the freestanding building known as Cube Berlin, right next to the city’s main train station for an institutional investor.

“The key word is efficiency,” says Rodeck. “And investors are interested in another aspect, which can’t be emphasised enough: sustainability. Digitisation is creating new requirements at a lightning pace, and all investors want to know that their buildings will still be able to fulfil market requirements after a few years have passed.” This means that climate risks can also be seen as a major opportunity for promoting innovations in the real estate industry. There’s time to do that by 2050. Until then, every day counts.

For more in-depth information, visit the sustainability portal at